So, in Parts I & II of my series on “Upcycling,” we’ve seen that you can re-purpose empty bottles and containers, clothes, furniture, etc., giving them new value, beauty and purpose… but can you do the same thing with a house? Or an apartment building? Or a school? Why not! Today, for the finale of my three-part series on how and why to re-purpose just about everything, we’re looking at “upcycling” on an architectural scale. 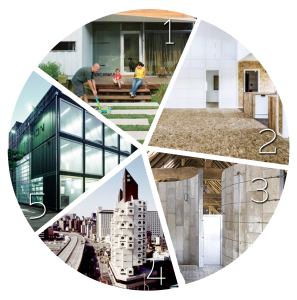 This isn’t just a fun hypothetical or a cooky, avant-garde experiment. This is actually being done, and with good reason and a whole, glorious variety of results.

With the rate at which much of the world is being built up, humans as a whole are having to deal with new and overwhelming consequences of our zeal for architectural conquest. Urban sprawl – the continual expansion of new and existing cities and suburbs into the countryside – is destroying and fragmenting wildlife habitats and farmland, as well as putting strains on critical resources, such as drinking water and fossil fuels, all over the world. NASA has an awe-inspiring satellite image project that shows just how huge humans’ impact on the land has been, even in just 10 years! And the rate at which cities are expanding is only increasing, both in the U.S., and in booming developing nations like China and India.

But there is another big problem with our constant construction that often gets ignored: waste. Construction projects create tons of it – literal mountains of it. According to the U.S. Green Building Council, “buildings use 40% of raw materials globally (3 billion tons annually),” and the EPA estimates that the United States alone produced 170 million tons of demolition and construction debris in 2003. That last number has only gone up since then, and that’s just the stuff that ends up in the trash – not the total resources that are used.

With all this in mind, I think it can safely be said that the greenest building you can build is one that already exists, and anything we can do to reduce, reuse and repurpose waste before it gets to the recycling, down-grading, and eventually throwing away phase is a huge help. But what does upcycling building supplies – or a whole building – really look like? What if you’re not into Austin’s “Cathedral of Trash” vibe (your loss) and don’t really want your home or workplace to look like Houston’s fabulous “Beer Can House”? Is this even really doable?

Dan Phillips has an awesome TED Talk on how he builds gorgeous, one-of-a-kind houses from reclaimed stuff, which does a great job of explaining how his team reduces waste by embracing the “imperfect” materials thrown out by other construction projects and uses them to create homes with a whole lot more character than the average “McMansion.” But I’m guessing these are still a little too “dumpster-chic” for some people, or maybe these houses just simply aren’t your style?

The good news is, architects are getting creative about converting existing spaces that have outlived their original purpose into unique, energizing new spaces in a whole variety of aesthetics. Some of the most obvious examples are all the expensive new lofts made from converted warehouses or restaurants and bars located in renovated firehouses or neglected old movie theatres, but architectural upcycling can go beyond just an imaginative renovation. For example, in the above image:

I know there are tons more that I haven’t included here (for example a bunch of really cool tiny houses incorporate this idea), but that’s all for now. I’ve really enjoyed looking a little deeper into all things “upcycled,” but the one category of “upcycleables” I haven’t covered yet is IDEAS. There are so many amazing inventions in this world that started out as fascinating, lofty concepts with no real-world applications. It isn’t until someone else re-appropriates them in a completely different field, in some completely unintended way that their value was recognized by society at large. This is why we need different types of thinkers and doers to get together more often: we need both the spark and the fuel to start the fire. I think it’s important that we take these concepts, repurpose them and apply them to new areas for which they were never intended. I think this is important pretty much regardless of the topic. So, in that spirit, please share your ideas/comments/questions/exclamations/critiques below!

Posted in: Art and Design, Sustainability